Study: Here’s the Real Cost Per Credit Hour Students Have to Pay

Looking to calculate the real cost of attending college? Consider the cost per credit hour each school charges students to get the best financial snapshot.

It’s not always easy to project college costs for incoming students. Even at the smallest unit, a college credit, costs can vary.

That’s why, in a new study, we used Department of Education tuition data to take a closer look at what the average cost per credit hour really is these days for incoming freshmen. Spoiler alert: it’s probably more than you think.

The study also underlines how widely students’ costs can vary — and how much their college choices can impact those costs. Especially since each credit earned is a step toward a 120-credit-hour undergraduate degree, and each step must be paid for.

The average cost per credit hour is $594 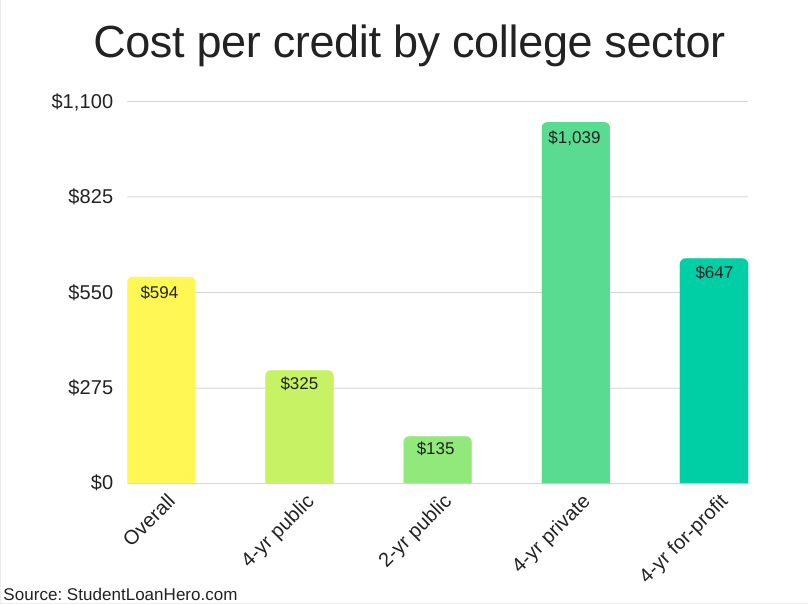 After calculating the average cost per credit hour for colleges across every sector (including private and public, for-profit and not-for-profit, and two- and four-year colleges), the typical cost of a college credit comes out to $594.46.

But just because that’s the average across all institutions for which tuition information is available doesn’t mean it’s what a typical student pays. Additionally, the type of college a student chooses has a significant impact on how much they pay per credit. 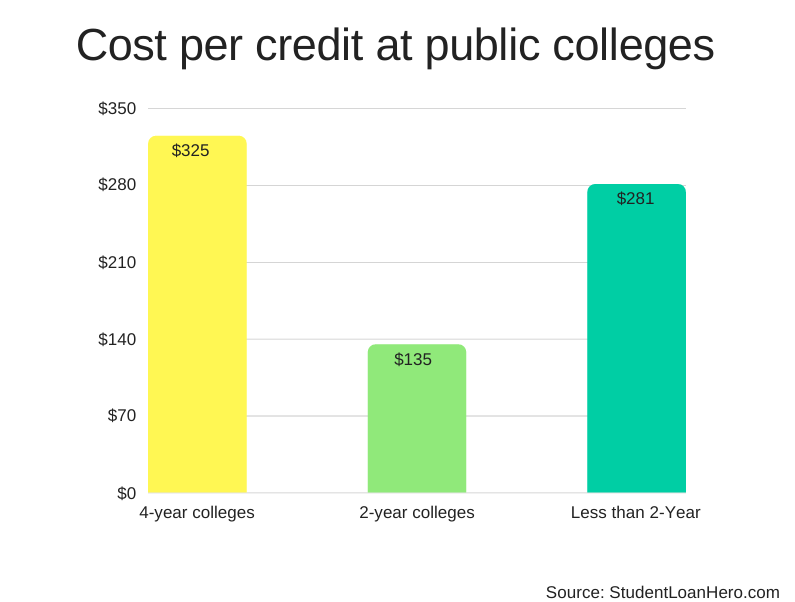 Here are the average costs of a college credit for public colleges:

Two-year public schools, such as community colleges or local technical or vocational schools, have the lowest average cost-per-credit of any college sector.

With the minimum 120 credit hours required for a bachelor’s degree, a student attending a two-year school for their first 60 credits then transferring to a public school would save $11,377 on their college education on average.

Of course, the savings provided by attending two-year public schools will vary by state.

New Jersey, for example, has the biggest dollar-cost difference between two- and four-year public schools, at $169 and $519 per credit, respectively.

Therefore, a student earning his first 60 credits at a New Jersey community college before transferring to a four-year in-state school would save $20,990 on tuition costs.

View our full state-by-state analysis of how much students can save by attending community college.

Four-year private colleges have the highest costs per college credit at $1,039 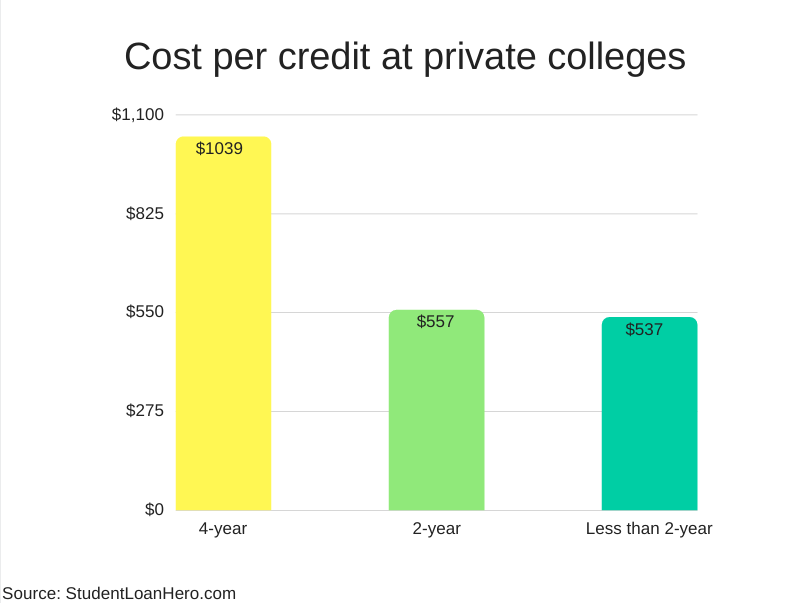 When it comes to private schools, students are paying the highest cost per credit hour. Here’s why:

What’s more, when comparing two-year private and public colleges, private schools cost more than four times as much per credit. Therefore, when it comes to higher education, a private college experience comes with a higher premium.

However, students hoping to attend a private college can try the method of attending a lower-cost college first and then transferring. By earning their first 60 credits at a community college before switching to a four-year private college, a college student could save a whopping $54,659 on average.

Plus, by attending a community college first you’ll likely need to take out less federal student loans or private student loans to pay for your education.

In many states, the savings are even higher.

For example, in Rhode Island, the state with the biggest difference between private school and public school tuition costs, a four-year degree would average $132,200 more when earned from a private school.

And even in North Dakota, the state with the smallest cost gap between public and private, the savings are still high at $30,300. 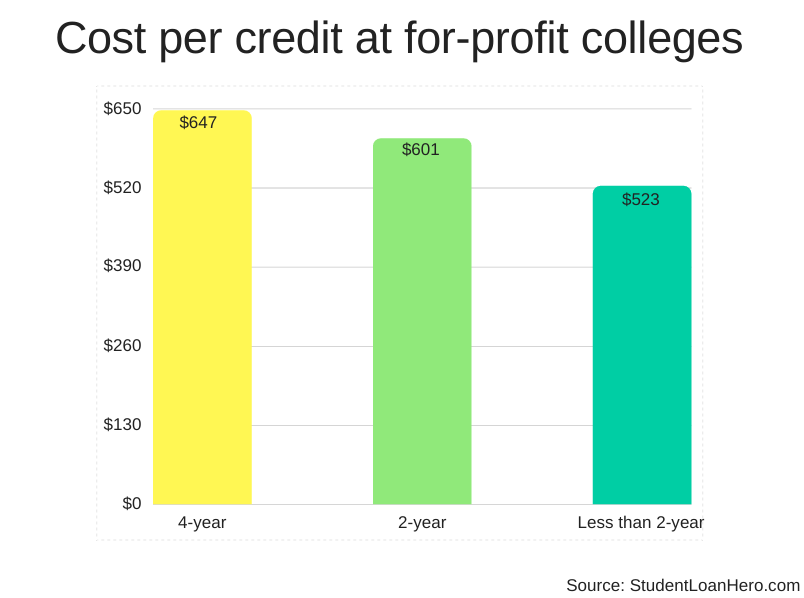 Then there are the for-profit schools. Here’s the breakdown regarding costs per college credit for these institutions:

The cost-per-credit at a four-year, for-profit college is cheaper than at private colleges. But it’s double what a college credit costs at a four-year public school.

Additionally, among two-year schools, the cost per credit at a for-profit college is about 4.5 times higher on average than at a community college or other public school.

And while for-profit schools cost twice as much or more to attend than their public counterparts, they tend to offer less value to students. In fact, instead of boosting earnings, most students of for-profit schools actually earn less after their degree than they did before.

“On average associate’s and bachelor’s degree students experience a decline in earnings after attendance, relative to their own earnings in years prior to attendance,” the National Bureau of Economic Research reported in a 2016 working paper.

When it comes to college ROI, the high costs of for-profit schools combined with poor outcomes on post-study earnings can make these types of institutions a poor investment for students.

The figures outlined so far are the upfront costs of earning a college credit at different institutions of higher education.

But how much does a credit cost if a student loan is used to pay for it?

Currently, the Department of Education has interest on federal Direct Loans at 3.76% APR. That is an effective rate of about 20 percent over 10 years.

Simply using a student loan to cover college costs effectively increases per-credit costs anywhere from $27 to $209. And for a full 120-credit undergraduate degree, additional interest costs can range from $3,240 up to $25,080.

This highlights the importance of avoiding and minimizing student loan debt. It’s truly the key to keeping the true costs of college low. Not to mention keeping monthly costs affordable once student debts enter repayment.

Overall, this study underscores the fact that going to college in America is a costly affair.

But it also reveals the wide gap in costs between different kinds of colleges. What’s more, it proves there are choices college students can make that can significantly decrease the costs of their studies and degrees.

Methodology: College credit costs were calculated using tuition data from the U.S. Department of Education. The cost was based on annual tuition and fees for the college, assuming two semesters of full-time enrollment (12 credits). Public school averages are based on the cost-per-credit for all two-year and four-year public colleges for in-state residents. Private school averages are based on all tuition prices at private not-for-profit and private for-profit colleges in each state. Data is for 2014-15 school year, released May 2016.