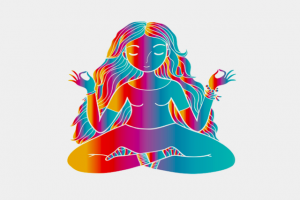 Maslow’s theory of self-actualization is the idea that individuals are motivated to fulfill their potential in life.

Origins of the Theory

During the mid-20th century, the theories of psychoanalysis and behaviorism were prominent in the field of psychology.

Though largely very different, these two perspectives shared a general assumption that people are driven by forces beyond their control. In response to this assumption, a new perspective, called humanistic psychology, arose. The humanists wanted to offer a more optimistic, agentive perspective on human striving.

The theory of self-actualization emerged out of this humanistic perspective. Humanistic psychologists claimed that people are driven by higher needs, particularly the need to actualize the self. In contrast to the psychoanalysts and behaviorists who focused on psychological problems, Maslow developed his theory by studying psychologically healthy individuals.

The Hierarchy of Needs

Maslow contextualized his theory of self-actualization within a hierarchy of needs. The hierarchy represents five needs arranged from lowest to highest, as follows:

When Maslow originally explained the hierarchy in 1943, he stated that higher needs generally won’t be pursued until lower needs are met. However, he added, a need does not have to be completely satisfied for someone to move onto the next need in the hierarchy. Instead, the needs must be partially satisfied, meaning that an individual can pursue all five needs, at least to some extent, at the same time.

Maslow included caveats in order to explain why certain individuals might pursue higher needs before lower ones. For example, some people who are especially driven by the desire to express themselves creatively may pursue self-actualization even if their lower needs are unmet. Similarly, individuals who are particularly dedicated to pursuing higher ideals may achieve self-actualization despite adversity that prevents them from meeting their lower needs.

To Maslow, self-actualization is the ability to become the best version of oneself. Maslow stated, “This tendency might be phrased as the desire to become more and more what one is, to become everything that one is capable of becoming.”

Of course, we all hold different values, desires, and capacities. As a result, self-actualization will manifest itself differently in different people. One person may self-actualize through artistic expression, while another will do so by becoming a parent, and yet another by inventing new technologies.

In addition, Maslow suggested that self-actualizers tend to be highly creative, autonomous, objective, concerned about humanity, and accepting of themselves and others.

In 1976, Wahba and Bridwell investigated these issues by reviewing a number of studies exploring different parts of the theory. They found only inconsistent support for the theory, and limited support for the proposed progression through Maslow’s hierarchy. However, the idea that some people are more motivated by B-needs than D-needs was supported by their research, lending increased evidence to the idea that some people may be more naturally motivated towards self-actualization than others.

A 2011 study by Tay and Diener explored the satisfaction of needs that roughly matched those in Maslow’s hierarchy in 123 countries. They found that the needs were largely universal, but that the fulfillment of one need was not dependent on the fulfillment of another.

For example, an individual can benefit from self-actualization even if they have not met their need to belong. However, the study also showed that when most citizens in a society have their basic needs met, more people in that society focus on pursuing a fulfilling and meaningful life. Taken together, the results of this study suggest that self-actualization can be attained before all of the four other needs are met, but that having one’s most basic needs met makes self-actualization much more likely.

The evidence for Maslow’s theory is not conclusive. Future research involving self-actualizers is needed in order to learn more. Yet given its importance to the history of psychology, the theory of self-actualization will maintain its place in the pantheon of classic psychological theories.