Want to Improve Your Communication Skills? Stop Saying These 25 Words. 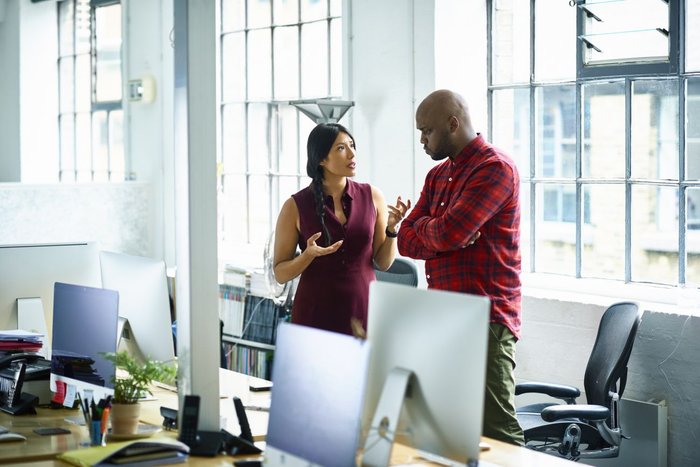 Stop saying these words in the office. You’ll improve your communication skills and your coworkers will thank you.

For thousands of years, our most powerful tools to change the world and our surroundings have been our words. That’s still true today.

From the lines you hear on TV, the commentary you hear through podcasts to the social media posts you read on a daily basis, our words guide us through everything. It’s why political campaigns spend so much time on messaging, why companies spend so much time on advertising and why I work as an editor. Because words are powerful, they shape how we see the world.

Knowing this, it’s important we select strong words that help us move forward with our goals, but most of us sabotage ourselves with our word choices. Whether you’re unconsciously belittling yourself, your time or your colleagues, there are simple changes you can make that will help you communicate better.

Here are 25 words you should either stop using altogether or stop using so often, with explanations as to why and what you can use instead. How many of them do you use every day?

1. Actually. Don’t be the person who has to correct everyone in the office. Of course, everyone makes mistakes, and in your job you will sometimes have to clean up other people’s messes. But when you do correct someone, do it with grace — don’t rub it in their face with a “well, actually …”

2. But. One problem with the word “but” is that it makes the formulation of your sentences so obvious — and it has a tendency to make people forget about everything you said before it. For example, when you say, “I like how you did this, but …” people are just waiting to hear what you didn’t like, rather than dwelling on what you did like. By connecting those thoughts with the word “and” — or just by making them separate thoughts — you can make sure people will hear both parts of what you’re saying.

3. Assume. A key to company culture is feeling respected, heard and seen. If you say you’re assuming something, you’re really just admitting that you didn’t spend even five seconds listening to someone else. This one is such an easy win, and not only are your co-workers going to appreciate that you listen to them, but you’ll probably end up learning some things.

4. Disrupt. The word has been used so many times by startups and tech firms that it has lost all its meaning. At this point, everyone is a disruptor, which means that no one is really a disruptor.

5. Dude. Just leave this one behind when you graduate college. Saying “dude” in the workplace will either make you sound younger and more immature than you are — or do the opposite, and make you seem out of place and in denial, sort of like Steve Buscemi trying to play a kid in 30 Rock. If you don’t know everyone’s name in your office, try to learn them. People like to feel seen, and remembering names is a part of that.

6. Fault. If you’re talking about whose fault something was, you’re losing — your co-workers usually don’t care whose fault something was, they just want it to work. So, if you messed up, figure out how you can solve the problem. If someone else made an error, don’t throw them under the bus — odds are you’re going to have to keep working with them.

7. Fine. “Fine” is one of those words that just seems to come with a sigh attached. Again, it’s about breathing positivity and productivity into your space, not allowing yourself to become negative just because it’s easy.

8. F#$K. Some offices might feature a more cavalier attitude about swearing, but you should at the very least make sure you know how your co-workers will react to four-letter words before you let one fly. Even then, we often use swear words as a catch-all when we could be trying to express ourselves more clearly.

9. Guys. I’m guilty of this one, but there are a couple of easy reasons why we should all stop using “guys.” Firstly, because it’s often wrong — turns out, women and non-binary people work in offices, too! Secondly, it’s overly informal. Lastly, it’s easily replaceable: We can just say “everyone” and make everyone happy.

10. Honestly. If you have to say “honestly” before you make your point, you’re doing something wrong. If you always say what you mean, you won’t have to clarify when you’re being honest.

11. It. This one might surprise people, but often, we rely too much on pronouns which can muddle our meanings. For example, you’ve probably read emails that say something like, “I asked Sarah and Jane to work on that, but I guess she already did it.” Then, you have to spend the next five minutes scrolling through previous emails to figure out who “she” is and what “it” is. When in doubt, always be clear.

12. Just. “Just” is one of those words that is meant to minimize what you’re saying. For example, if you’re “just wondering” or telling someone it will “just take you a minute.” There’s no need to minimize things: Your needs are important, just like other people’s time is important.

13. K. When you get a text that just says “K,” you know with absolute certainty that the person on the other end of the line is furious with you — or at least, a little miffed. So, when someone gives you a task at work and you simply reply “K,” you’re sending negative vibes. More than that, you’re sending unproductive, negative vibes. “K” doesn’t help solve anything.

14. Kinda. “Kinda” doesn’t really mean anything, and only ever serves to weaken your point. If you only “kinda” did something, or “kinda” thought something, it also by definition means you “kinda” didn’t. Most employers appreciate decisiveness — it can help cultivate confidence in you among your co-workers.

15. Like. We all use filler words. Some people say “um,” other people “like,” but whichever is your vice, train yourself out of these words so you can speak more concisely. People will appreciate it.

16. LOL. It’s one thing to type this one, but for some reason people hate hearing it spoken. This isn’t just true for baby boomers or gen Xers — according to a survey of 1,000 people, millennials hate when people say “LOL,” too. Then again, there’s no point in saying “LOL” when the whole point is that you’re supposed to be laughing out loud.

17. Need. When you’re negotiating for something you want, don’t tell people you need it. Instead, prove why the other party would be better off giving it to you. For example, if you want a raise, point to your accomplishments and not your rent cost.

18. Nope. It’s OK to say “no” to things, but there’s no point in being dismissive or overly casual about it. It might even be satisfying to say, but keep in mind that no one wants to hear the word “nope” — especially when they’re asking for help.

19. Personally. There’s a reason people always say “It’s not personal” when talking about business. As long as you work for a larger organization, your personal opinion on a matter isn’t as important as your expertise. When you speak, you want people to know you only ever have everyone’s best interest at heart.

20. Ping. People don’t want to be pinged. If you’re pinging someone, it typically means you’re asking him or her to do something for you immediately, which is already inconvenient. Add on that “ping” is just an annoying word, and you have an irritating combination. Just tell someone you’ll email him or her, or else send the information.

22. Should. Either you’re talking about something you should have done, or you’re telling one of your co-workers what they should do. Neither one of those options is likely to win you many friends.

23. Try. A small, green puppet once said, “Do or do not. There is no try.” Yoda lived by those words, and so should you. If you know you don’t have time for something, it’s OK to say “no” — in fact, it can be a good thing. But saying you’ll try is saying that even you aren’t sure you’re willing to achieve a task.

24. Unfair. We all know that life isn’t fair, and typically, the only reason we (or at least I) use the word “unfair” is to complain about something. But complaining rarely helps you achieve your goals, so it’s more productive to either accept it or explain clearly why you deserve better.

25. Whatever. Nobody wants to hear “whatever” on its own — it makes you sound churlish and confrontational. But even if you’re trying to be accommodating (i.e., “whatever works for you”), “whatever” can backfire. Odds are that you have a preference, and it’s OK to value your own time.