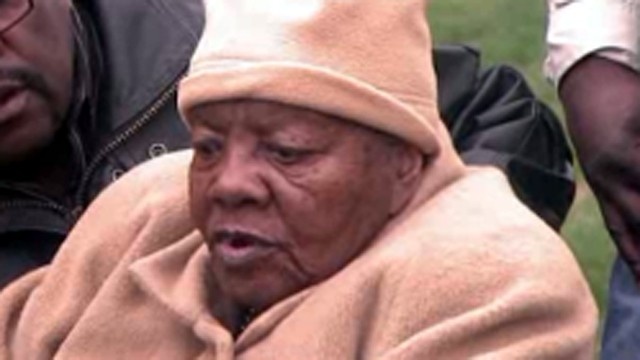 (CNN) –Somebody at a New York nursing home apparently thought it would be a great idea to bring in a young hard body for the elderly residents to watch dance.

In other words, a male stripper.

But after a man found a picture in his 86-year-old mother’s belongings of a man wearing only “tighty whiteys” hovering very much in his mom’s personal space, the lawyers got involved.

Bernice Youngblood, the wheelchair-bound resident whose son, Franklin, is suing the home on her behalf, told CNN affiliate WCBS, “I felt terrible. I was shaken and going on.”

WCBS reported that the East Neck Nursing and Rehabilitation Center in West Babylon said all 16 people on a panel of residents approved the show.

“There is nothing inappropriate about it,” the facility’s attorney, Howard Fensterman, told reporters on Tuesday.

Fensterman, according to the WCBS report, said that Bernice Youngblood enjoyed the event and was chaperoned by her son’s live-in girlfriend, who the nursing home said appears in the photo.

The family said the woman in the photo is a nursing-home staff member.

According to a lawsuit filed last month, Bernice Youngblood, who the suit says has partial dementia, was “confused and bewildered” when the stripper approached her and directed her to “place her hands about and upon his body, including his genital area.”

The suit contends the home has hired male strippers on other occasions for the “perverse pleasure of the defendant’s staff.”

Franklin Youngblood said his mother was forced to tip the stripper with her own money, which is supposed to be locked away at the nurses’ station.

“There’s too much sex and craziness that’s going on. Now they’re bringing it to the nursing home, and it don’t belong here,” he told WCBS.

The suit is asking for a financial judgment of unspecified amounts from a jury at trial. It is unclear from the legal documents when the stripping incident occurred.